Ecology, Then and Now

“See, Mom, the little house collects water off the roof when it rains and pours it into a big barrel here at the foot of the house. And look, there’s a windmill in the back yard that brings drinking water up from an underground spring.”

Robin is a professional artist and she was showing me her latest painting which she had done gratuitously for some new ecological group’s poster. Pointing to a young couple out to one side working in a garden, a wheel barrow nearby, she said, “See, they raise their own food organically and here are their children.” Sure enough, the kids were bent over picking strawberries.  A few chickens roamed about, their little coop off to one side where they laid their eggs and slept at night. There was also a large fan. “That’s for generating electricity,” she said proudly. And what you don’t see are the big batteries that store the electricity down in a basement under the house.

I couldn’t help smiling. “Were you aware that, except for the beach and ocean nearby, you’ve just painted a picture of my childhood home?” I asked. “I know,” she said. “Grandpa and Grandma still had the windmill when I visited them summers when I was a kid. They even got me to pick strawberries for a dime a box and I loved to gather eggs from the nests in the chicken coop!” There were orange trees in the picture too which we didn’t have in Minnesota, but one thing was missing. “Where’s the Jones’ House?” I asked. Of course, the question was not serious. Nevertheless, modern ecologists would, no doubt, figure out a better way to make a toilet. And the solar panels on the roof of her house in the painting had not been thought of in my day.

I was reminded of all this when I carried a basin of water from the kitchen sink out to my plants on the patio this morning. I’ve been doing that lately to conserve water. In “the olden days” we had what was called a dry sink. A pump at one end pumped up water from the underground cistern that collected water from the roof and poured it into a basin in the sink but we had to be careful not to let water collect in the sink itself because there was no drain. The dry sink was there to catch those errant droplets which could be easily wiped up with a towel. We used two basins in that sink. First they collected hot water from the reservoir on the wood stove in the kitchen. (In summer when it was too hot to use that stove, Daddy brought in a kerosene stove from the garage where we’d heat water in a big kettle.) Then one basin would be used for washing dishes and the other one for rinsing them. In the washing basin we slivered off chips from a bar of soap. When our task was done the water was carried out to the back porch and tossed on the lilac bush nearby. When I got to be good enough to do that without spilling, it was the fun part of washing dishes by hand, and how that lilac bush produced aromas of heavenly intoxication in the spring!

Our home was on top of a hill in the country so wind was nearly a constant there. The “wind electric” that supplied the batteries down in our dirt basement didn’t operate for more than a few years though because by then the TVA, Tennessee Valley Administration, had brought electricity to rural areas. In time Daddy had our house plumbed as well and we had the luxury of a bathtub as well as an indoor toilet, but my great grandchildren will learn from me how my parents gave me baths before we got our bathtub. A laundry bucket would be filled out in our back yard where the sun could heat the water for a few hours. For privacy a sheet would be hung on the clothes line between the bucket and the house and I’d go out armed with soap, wash cloth, towel, fresh underwear and outer clothes. Then I’d undress, get in, soap myself, soak, and rinse off before stepping out on the grass to dry. My little “bathroom” had skylight, fresh air and clean water that ended up watering the lawn. In winter the tub was placed by our living room potbellied stove. My parents had to settle for sponge baths.

I’m not up on the subject of what future homes might be like, but I won’t be surprised if they will be self sufficient except for water and sewage. The “olden days” were a lot of work for parents but more fun for kids.  And I never knew then there was such a word as “ecology.” 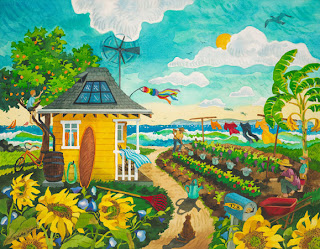 Posted by Joyce Wethe Robertson at 9:28 AM

Joyce Wethe Robertson
Because I like to write essays, my daughter suggested I open a blog and get some feedback. Before I knew it she did it! So, here I am with my ideas and thoughts gone public. I don't know who, other than my family and friends, will ever look at it, but we'll see. Maybe I'll get a pen pal or two?